After Bacon in Three Ways

You Looking at Me?

Imagine revisions of popular action films, reframed from the point of the antagonists. Their actions presented in a sympathetic light. For instance, the errors of the hero are dwelled upon and the hero's poor dress or inability to communicate with the antagonist is illustrated. Also this imaginary film will use visual techniques to emphasise common points and sensations. Dramatic close ups of breathing and blinking, forcing humanity into the narrative and subjugating the sensational.

The loss and destruction of property would be noted on screen, with a replacement value total aways present and updated as the film continues. Interviews conducted with concerned citizens, outraged at the behaviour depicted on screen are given time to express their feels and offer suggestions to the relatively undifferentiated antagonists and protagonists. Medical advice and warning, details of treatments and the long road to recovery, expressed by medical professionals for those characters sustaining injury. The version of this film for the USA market will display a price tag for that layer of information.

This film would be terribly dull, with moments of humour, but a sad, defeated humour. This would also be noted in the film.

Today is a bit sunny, I ventured out into the world to check out a cafe mentioned in a local website. It is a the same transit zone as I, so should be cheap to get there. On my walk to the hole underground, I saw a funeral procession, at first I was excited to see a fellow in a top hat, but then was sad to see he was protecting a hearse. I exchanged trains at London Bridge, from Jubilee to Northern Lines, heading to Camden Town station. There are many tunnels to roll through, like a red blood cell, when changing lines. There were a lot of body modification shops near the hole from which my tunnel punctured the ground. A short walk down a road is the coffee place. A The coffee is a normal here, judged by tasting good and full. The first real cup I have had in months.

I am thinking about using FileMaker as a blogging platform, can somebody tell me why this is a bad idea in the comments.

Another critic chatting about money and art and power dynamics to a rabble. Warning the transitions between videos are strangely un-jazzy, jazz.

I only ever had one night terror

I was a small child, dreaming for my bedroom at night, from the point of view of myself awake and either a small cow or large dog, was standing on the end of my bed.

Hughes makes errors citing the word commodity, expanding and diluting it meaning. Art escapes many of the bounds that define a commodity. The market situation he discusses is far more like the double jointed, bewildering market of currency speculation. He must be the only person to ever take Any Warhol literally, it wasn't really a factory, just called one. Real factories producing commodities have no relation to art production of any form, even silly art works. For a critic to grow tired of an artist work is not bad, but to keep your eye on they sales price is. He has been been fully seduced into displaying work in this programme he hates because of its price is another failure. He should be heaving himself over to a cool show, check it out and let us all know, what is so hot about it. While reassuring the viewer, yes this money thing is folly like so many before and forthcoming.

The Mona Lisa Curse from U_A_P on Vimeo.

This clip reminds me of stories told to me from a friend, who works with people with disabilities. Often his clients abilities are underestimated and the true range of their abilities can be blotted out by a dull victim narrative.

CARIBOU - Odessa from Caribou on Vimeo.

Fun Fact: There is an Odessa in Saskatchewan!

When I got up this morning, I typed “birth” into the search field of iTunes and played the following songs

This show was great, there was a lot of flying around, adventures that did not take very long and a particular explosion that was used in a number of shows as their budget shrank.

The photo you sent is not being released for publication due to the refusal of the distribution company.

Gumby hits the streets of TO to celebrate Canada's win

In this footage, shot by S. Mines of Toronto, a celebration is being held for the occasion of some sort of victory.

Yesterday, Rachæl and I explored this fine building and its many sights contained within. I was beguiled by many of the works of people, the sensitivity to the subjects humanity was often deft. Coming out of a time in which people often had vast gulfs of knowledge, status, wealth and power keeping them apart, the effort hints at a duress. This, like salt, makes the work so much easier to enjoy.

Here are some Writers, reading

Steve Calvert sent me this link to an event he helped out with. It was held in Vancouver, not very long ago, but time will turn this statement false. I have one of Danato's prints on my wall.

The set up of this talk reminds me of. 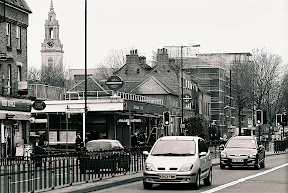 but doesn't any discussion of discursive marginalization merit at least a little drama?

In the Western Tradition, A Great Apocalypse Story

Who wants to start a methane mining company?

The Trap and Interview with John Ralston Saul

What Curtis fails to state when recanting the neocon point of view, seems obvious. The neocon ideal, of the new human free agent, is a sheath to simple greed. They do not need to believe in the new free human, but knows that they can prevail against the atomised they create. The interwoven nature of US government, military and business creates a large block facing smaller blocks, constantly smashing them smaller. As US business, military are not fragmented this makes looting simpler.

Saul expresses more cogent view of the world than Curtis, they have both undertaken the same task to synthesise the events of the world, in the recent years, for its citizens. The form that Curtis uses is captivating and of this moment, Saul is just more correct and you will have to read him. He seems to not really have much of a presence on the internet, though does quite a bit of public speaking. This interview I have posted is tawdry, but gets his voice across a bit.

Shopper Returns in Book on Pillow